Supermarket chainsno longer the only place to buy the week’s groceriesare pumping more money into advertising to fend off competition from mass discounters, drug stores and even dollar stores.

The ad splashes are cutting into profit margins at a time when sales remain weak across the industry. Chains including Safeway Inc. and Great Atlantic & Pacific Tea Co. are touting price cuts on thousands of items, a double whammy to profits: spending to entice customers to come in for lower-priced items.

The increased spending hasn’t yielded an immediate payback, but some industry analysts say the strategy could help some chains shake the image of being too expensive. Supermarkets are hoping to parlay the spending into loyal customers as the economy improves. For now, though, profit margins could take a hit.

The supermarket chains no longer compete just in their traditional industry. Mass discounters Wal-Mart Stores Inc. and Target Corp. and wholesale clubs such as BJ’s Wholesale Club Inc. have grocery offerings. Traditional drug stores like Walgreen Co. and CVS Caremark Corp. are bolstering their grocery offerings, while Family Dollar Stores Inc. and other similar discounters are expanding their offerings for the home pantry.

Data from research firm Kantar Media show supermarket chains’ advertising spending rose 19% to $393.3 million during the first half of 2010 compared with 2009. The increase is ahead of a 9.5% jump by other retail segments and a 5.7% increase by all industries over the same time.

Safeway’s “Promise” campaign has been one of the more ambitious among large grocery chains during the past year, highlighting lower prices on thousands of items in television and other media. Volumes have improved in recent quarters at the third largest traditional grocery chain in the U.S., but the lower prices have kept sales gains elusive.

Investors are wondering whether Safeway will maintain its aggressive advertising pace. 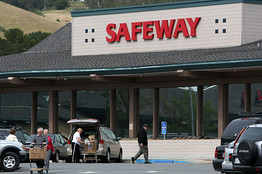 Customers outside a Safeway store in San Anselmo, Calif.

Safeway declined to comment on future advertising plans for fear of tipping the company’s hand to competitors, but a spokeswoman said Safeway continues to reinforce elements of the “Promise” campaign for each operating division.

Kroger Co. and Supervalu Inc. also have stepped up their media spending. Kroger says part of the increase comes as it has redirected spending from weekly supermarket circulars, which are becoming less effective, to radio, television and the Internet.

“The weekly ad circular probably doesn’t have the impact that it used to have,” Kroger Vice President of Corporate Affairs Lynn Marmer said.

Kroger, the largest traditional U.S. grocery chain by sales, has performed well during the downturn, as it solidified an image of having lower prices before the downturn. Its shares are up 6.3% this year. Safeway and Supervalu, meanwhile, have struggled to shake perceptions of operating stores with higher prices, and their shares have trailed Kroger.

“Advertising alone is not going to be the magic bullet,” Jefferies & Co. analyst Scott Mushkin said. “They have to marry it with real actions.”

One low-price player putting pressure on traditional retailers is Aldi Inc. With 1,100 stores currently in the U.S., the discount operator plans to open up to 100 stores this year and next. When it enters a state, like it did with Texas this past year, Aldi launches an advertising blitz, a strategy that it started in the past couple years.

“Our advertising, as much as our low prices do, get people into the stores,” Aldi spokeswoman Heather Tarczan said.