Throughout my career, I have had a variety of titles. These titles have ranged from UX designer to Full Stack Developer, with several others in-between. With such a multitude of job titles that can be designated in the world of web development, I can totally see how many can become overwhelmed or confused with the many existing roles.

First, know that you probably do not need a huge team with every single job title for a typical website build, as many of these titles can describe the same individual. It is really more important to find at least two or three pros (based on project scope) who are capable of delivering what is needed to create a legitimate, custom website.

This is all somewhat subjective and opinion-based, as every agency is different. But, based on the various teams I’ve worked with, I believe that website development can be broken down into five high-level categories:

Aside from content and strategy, there are two broad job titles that can encapsulate and take ownership of the other three categories. Please allow me to introduce you to the web designer and the web developer. Have a solid set of these and you are destined to have a fantastic product!

When it comes to the web, I like to think there are two and a half common names that can be used to describe a web designer – graphic designer, UI/UX designer (the one and a half). In this section, I will elaborate on what each title means and how they play a part in website development. 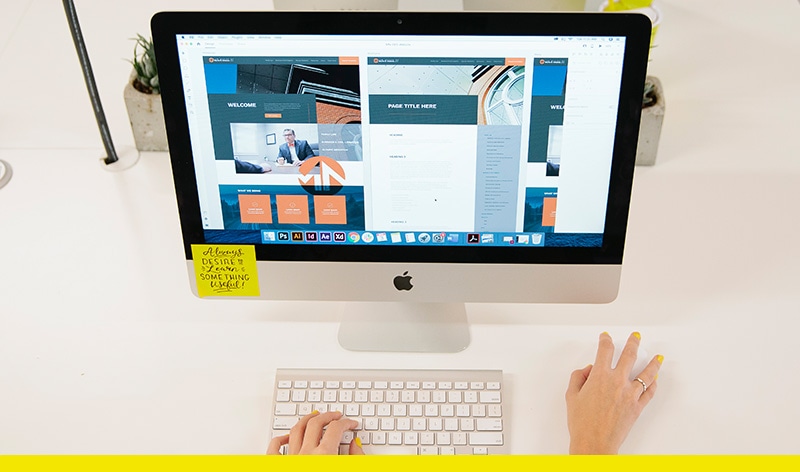 The great and powerful Wikipedia defines graphic design as:

This is a fancy way of describing someone who designs digital graphics like logos and brand images, iconography and many other things, at least in the context of a website. Before crossing the line into the other one and a half titles, a graphic designer will contribute to a website’s digital imagery.

Common design software that a graphic designer would frequently use to produce color palettes, mockups and other visual elements include Adobe Photoshop and Illustrator. 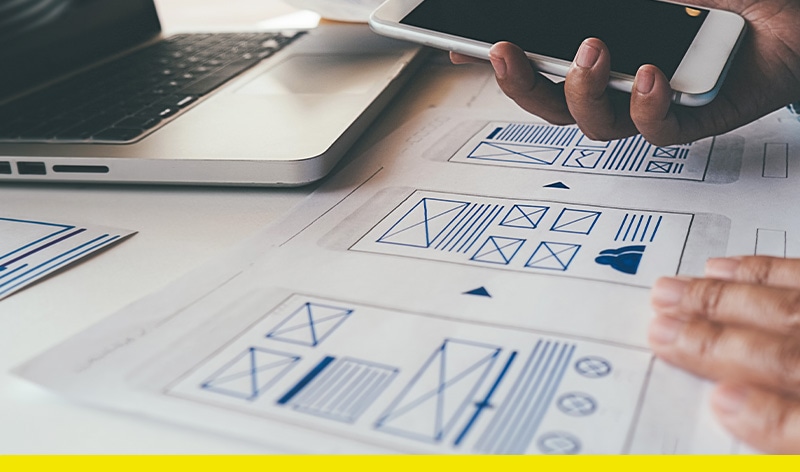 This one is (or these ones are) a little more unclear to most and are often lumped together. Hence the reason I say “one and a half”. You can be one or the other or both pretty easily. First let’s examine what each abbreviation actually means.

How a user interacts with and experiences a product, system or service. It includes a person’s perceptions of utility, ease of use, and efficiency.

In plain English, this means how someone uses your website. A UX designer studies and anticipates how a typical user will interact with a site and tries to make the experience as simple and intuitive as possible.

Making an easy-to-use website that effectively serves its purpose usually involves understanding the goals of the website, having a grasp on basic human intuition and knowing many of the proven methodologies of executing smooth digital interactions.

The space where interactions between humans and machines occur.

In this case, the user interface is what allows a user to interact with your website. Dashboards, buttons, links and forms are all common phrases that you will probably hear when discussing a user interface. It’s basically the toolset used for UX, which is why the two are usually closely paired and frequently considered synonymous.

Common tools a UI/UX designer may reach for are Figma and Adobe XD, among other visual designer tools to produce prototypes and mockups.

Note, a UI/UX designer may likely also be considered a front-end developer, but we will get more into that shortly.

Web developer is defined on Wikipedia as:

A web developer is a programmer who specializes in, or is specifically engaged in, the development of World Wide Web applications using a client–server model.

In other words, a web developer is someone who builds a website utilizing web-based technology. 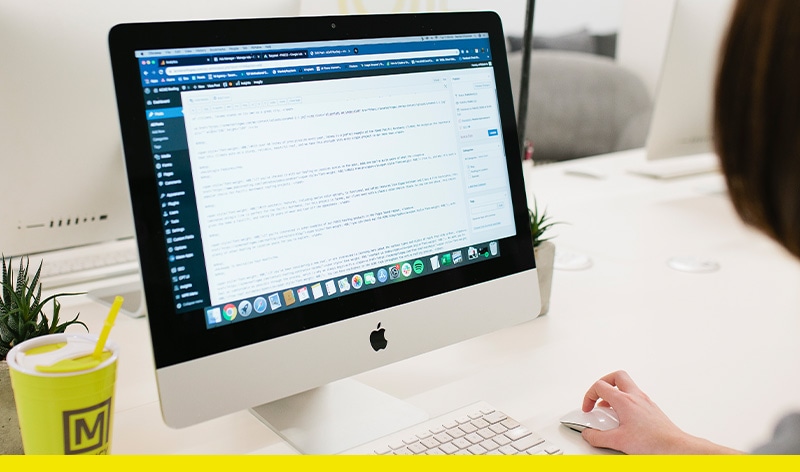 Technologies used for the front-end of a website in their most basic form are HTML, CSS and JavaScript.

HTML (Hypertextual Markup Language) is used to markup content with what we call “tags” to help define certain elements like headings, bold and italicized text, lists and more. It allows developers to help browsers understand what is being displayed as well as getting CSS and JavaScript ways to style and trigger front-end functionality.

CSS (Cascading Style Sheets) is a styling language for defining how the above-mentioned elements appear on a web page.

JavaScript has evolved over the years in definition as its uses have broadened. But in this context, it can be defined as a client-side (used by your browser) scripting language that can be used to control a website’s interactive functionality.

Some swiss army knife designers will possess the skills to write these languages to produce prototypes for developers. But a lot of the time this will fall on a front-end developer. 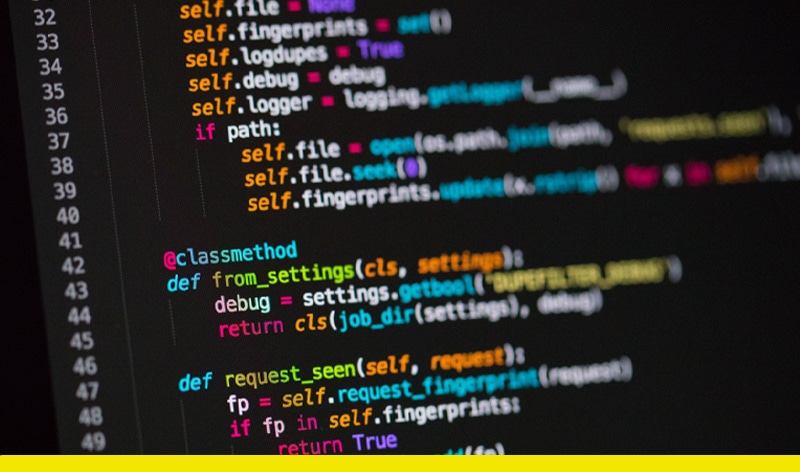 Back-end development is what usually separates the designer from the developer completely. A back-end developer works with server-side scripting languages (also referred to as programming languages, though not necessarily the same) like PHP, Java, Python, Ruby and more. They also handle data structure and how code queries and updates it in the database with SQL scripting.

The back-end and front-end developer skillsets sometimes get blurred when it comes to rendering a front end and how it is used to display, manipulate and update data from the backend but this is a subject for another article. 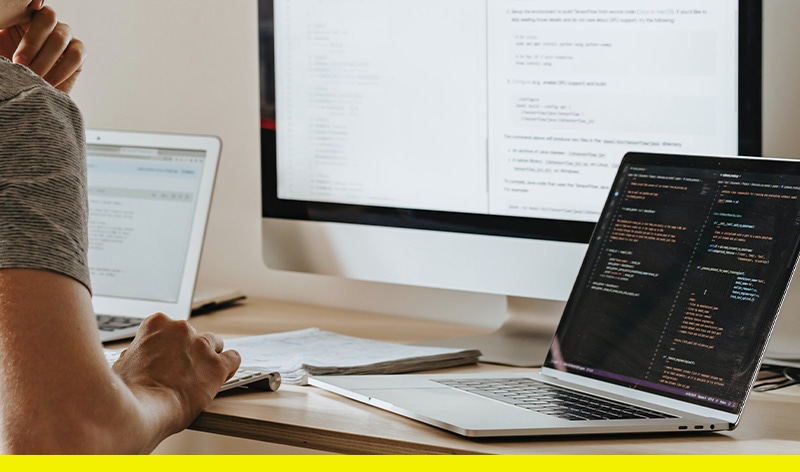 A full-stack developer is someone who is comfortable with both front-end and back-end technologies.

A very simple example can be made with WordPress, a popular CMS (content management system). When building a new plugin to be used with a site, a programmer typically needs to develop a user interface and the scripts to control the interaction with it. They will also need to set up a table in the database or define what we WordPress developers call options. Lastly, they need to write scripts that handle database interactions to update, remove or edit data securely.

Though there are many hats that can be worn in this industry, we can categorize a designer as someone who creates the look and feel of a website with user interaction in mind. A developer is someone who executes what a designer predefines in a design, enables functionality within the design and implements the provided assets like images and typography.

Here at M Agency, we have been through this process many times and have team members who are proficient in creating an excellent and intuitive website design and seamlessly executing it with code. If you or someone you know is interested in acquiring a premium, dynamic website, reach out to us!